This is the summary of the book "International Law". The author(s) of the book is/are Professor Rebecca Wallace Olga Martin Ortega. The ISBN of the book is 9780414055513 or 0414055519. This summary is written by students who study efficient with the Study Tool of Study Smart With Chris.

Increasing contact between states
Read the full summary
This summary. +380.000 other summaries. A unique study tool. A rehearsal system for this summary. Studycoaching with videos.
Discover the Study Smart Package 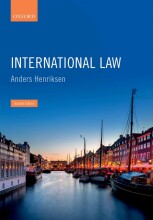